Why does the world exist at all?

Ever wonder why does the world exist at all? Why is there anything out there?  Philosophers and sages have pondered this question for eons. Religion tells us God made it for his plaything. A bit naff. Science says it all just happened when the right mixture of gasses and molecules were in the air, all by itself. A bit pointless. An intriguing question that no one seems able to answer. 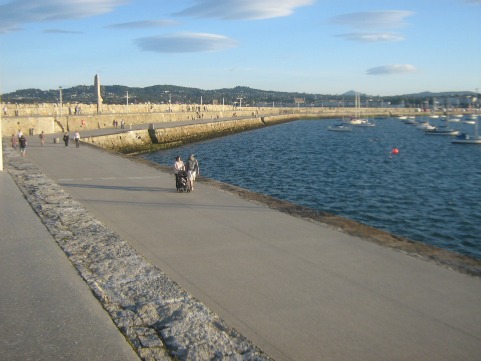 In certain esoteric philosophies it has long been argued that the world is really an illusion, not actually there but you think it is (Buddhist maya). And your continuous engagement with this illusion only reinforces its seeming reality and leads to more suffering. Indeed I’ve written about this extensively myself. Here and here and here (passim). Recently someone asked me if all this is so, then why is anything out there at all?

I’ve probably answered it in the Consciousness Series. However, let’s dig a little deeper.

Why does the world exist at all:
an answer from the dream world

A way of explaining this world as illusion is the metaphor of the dream.

This goes, the solid world that you’re seeing around you is only as real as the insubstantial one you experience when dreaming. After all, a pleasant dream (or nightmare) seems every bit as real when we’re having it as the waking one does.

Ok. But I’ve been thinking maybe this metaphor has been overused somewhat (because it’s such a good one). I know I’m as guilty as the next. It’s such an obvious one really. But going to the same well too often leads to bluntness. The definition of a cliché, after all, is a truth that’s told too often.

In that series of articles I postulate that Consciousness dreamed, or imaged all life into existence because it wanted to look at itself as 'other', which it did by smearing itself out into layers of seeming disparate parts, which appear as each of us.

and then, forgot it did this.

This last piece is important, hence the emphasis. Actually it’s really the disparate parts that do the forgetting!

Now I wasn’t by any means the first to come up with this idea, but it makes sense (at least in the weird way I see things!) For example, when we want to see if our tie’s on straight we look in a mirror. Some people video themselves before an interview to check for errors and such like.

And because our actions and thought patterns on the physical plain reflect the workings of the Higher Mind, we have good grounds for assuming consciousness does the same. But again, why? Obviously not to see if its tie's on straight.

How about to know what suffering is, what loss is, ultimately what love is.

Why does the world exist at all:
an alternative answer

So, is there a more apt, a more incisive metaphor than the dream?

I think there is.

How about a daydream?

This may be a more accurate metaphor because it’s a conscious form of creation. When we daydream, or go into a reverie, we are imaging a world that we want to see, what we’d like, what we’re hoping for, even if it’s just musing. And on the flip, if we’re worrying about some future event aren’t we imaging a nightmare? And that’s a conscious act.

Ok, I agree reverie is looking inward, so it’s a kind of subliminal act, a state bordering between the conscious and subconscious. But if we sit down and visualise the event intentionally then it’s full-on conscious.

This differs from a dream we have while sleeping which is unconscious, random, arbitrary. Remember I said we create this reality in order to look at ourselves, and then forget we did it?

Well, if our waking-dreaming (daydream) is a parallel of conscious creation at the highest level, doesn’t it follow that our sleeping-dreaming (nightmare) mirrors the part of us, the diffused layer of consciousness, that forgets? The nightmare arises when the soul sinks into its fog of slumber, what Plotinus called the passive material element. At this moment in history our conscious creation is having a terrifying nightmare: Ebola, global terrorism, children starving when there is enough to feed the planet ten times over, ecological collapse, wealth funnelled into private concerns and away from where it’s critically needed; hospitals, schools, urban deprivation.

So, to answer our question, why does the world exist at all? Well, it’s because you’re there. You are the important, overlooked component in all of this. And really everything’s just the outpicturing of your marvellous imaginosity.

Ask yourself what are you imaging? What do you think about a lot?

What if the world were just an extension of that imagination? Look at a sky dark and brooding, no matter how dark, how brooding, you know it’s still only vapour and mist, nothing really. Imagination is not concrete. It's not taking up any real estate in your head.

It’s what’s at the core of all creativity. Play with this. Allow it to bend and shape into any form you want, the way the piper’s notes create sound, whirling and swirling as they fly out of the instrument shape-shifting new realities. The world is rocks and cliffs and heavy stuff, but it is also laughter and song and a gentle breeze. In the end you decide how dense or light.

Maybe the answer is the same.

We need to reclaim our child’s wonder and imagination.  We've become a bit too serious down the centuries.  Philosophy, religion, all that heavy stuff has solved nothing only given us a huge hangover. And the New Age is going down the same path, inflated by its own self-importance.  Remember what it was like when you were a child? Do you? Remember a time when you could do anything? Now use that same wonder, channelled through the faculties of reason and logic, to create something amazing. The world only exists because you put it there, and when you want nothing but love for it then you will see it transformed. We begin this process by learning to take ourselves less seriously. Rediscover our childish playfulness.

Return from why does the world exist at all to the home page.