Fire in the Dark

Dedicated to NELSON MANDELLA, warrior of our time. 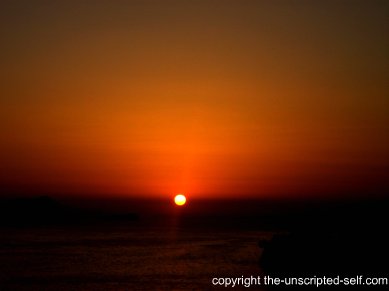 Recently I made a trip to Budapest. When I left Dublin it was a sunny bright afternoon, with exceptionally clear sun for December. As we progressed towards eastern Europe darkness quickly enveloped the skies.

I looked out my igloo-like window and in the darkening sky ahead I could clearly make out the half moon although it was only about 3.30 in the afternoon. I noted with some amusement that it looked just as far above me as it would were I on the ground. The cloud below me was a beautiful pink. I’m not quite sure if I saw that exact shade of pink before. Generally when I’m flying it’s either daytime or total darkness. Now it was a kind of half light, a twilight world where day and night existed at the same time. Yea, I suppose it was mystical, but I just felt incredibly privileged to be witness to Nature in her splendour.

Then looking behind I saw for the first time ever that I was looking down on the sun. Fiery red as it sank beneath the clouds. It looked a bit like it was drowning as it sank into the ever-enveloping darkness. This was a very moving experience, for the sun’s rightful place, whether the actual star or the oft-used metaphor, is in the heavenly sphere looking over us. Now it was the opposite like nature had been inverted.

And then, all of a sudden, it seemed as if the whole clouds were on fire as flaming tongues of crimson illuminated the snow-like cloud. Burning like a fiery penny, it receded further and further, sinking into its grave of blackness, beyond redemption it would seem.

Coexistence of Day and Night

This unique coexistence didn’t last long, but for those few moments the clouds beneath us became a silver and pink carpet turning the scene almost surreal, reminiscent of something Tolkienesque even. To the front of the plane was darkness, the half moon now shining a pitiless silver, pronouncing its wounded half self with a kind of cold distain. While to the rear a silvery white - you couldn’t call it bright - ethereal half light was strewn. Not unlike dawn’s first rays.

I thought nature’s battle between light and dark was over when suddenly the sun, like a resurgent god, rose again momentarily, cutting the dark sky with a river of blood, staining the silvery half light cloud above it. I’d never seen anything like that before. A tongue of blood fire splitting the night. It was almost like the rear of the plane was on fire, before this too passed as we surged forward.

Now, in the distance the sun became cigar-shaped, like the pictures of those UFOs you see, its orb receding further and further. I longed to be an artist at that moment so I could capture this wonderful transfusion of colour on canvas.  Black landscape in a blood red river resting somehow on a ghostly white background. Truly a magnificent thing to witness.

Everything is a kind of miracle really.

I spent a wonderful few days in beautiful Budapest. And, of course, there was our sun back again the next morning, smiling majestically down on the Danube and all the people. Reminding us that death is but a sham, but that change is inevitable.

The world is really a beautiful place, and like I was saying recently in Soundings (the newsletter of the USS), when we see it in this way, through the eyes of Consciousness, knowing that none of it is actually real, not in the weighing you down, burdensome sense, then it becomes a magnificent play, one that you are creating moment by moment by moment.

And, believe me you get ten times the kick out of it when you see it like that. That for me is true freedom.

Maybe I should be writing a travel website I spend so much time on the move! But in a way I suppose I am. After all isn’t Personal Development a journey of a sort too.  A journey without distance, as A Course in Miracles tells us, or the long march of freedom’s walk.

Return from fire in the dark to home page.